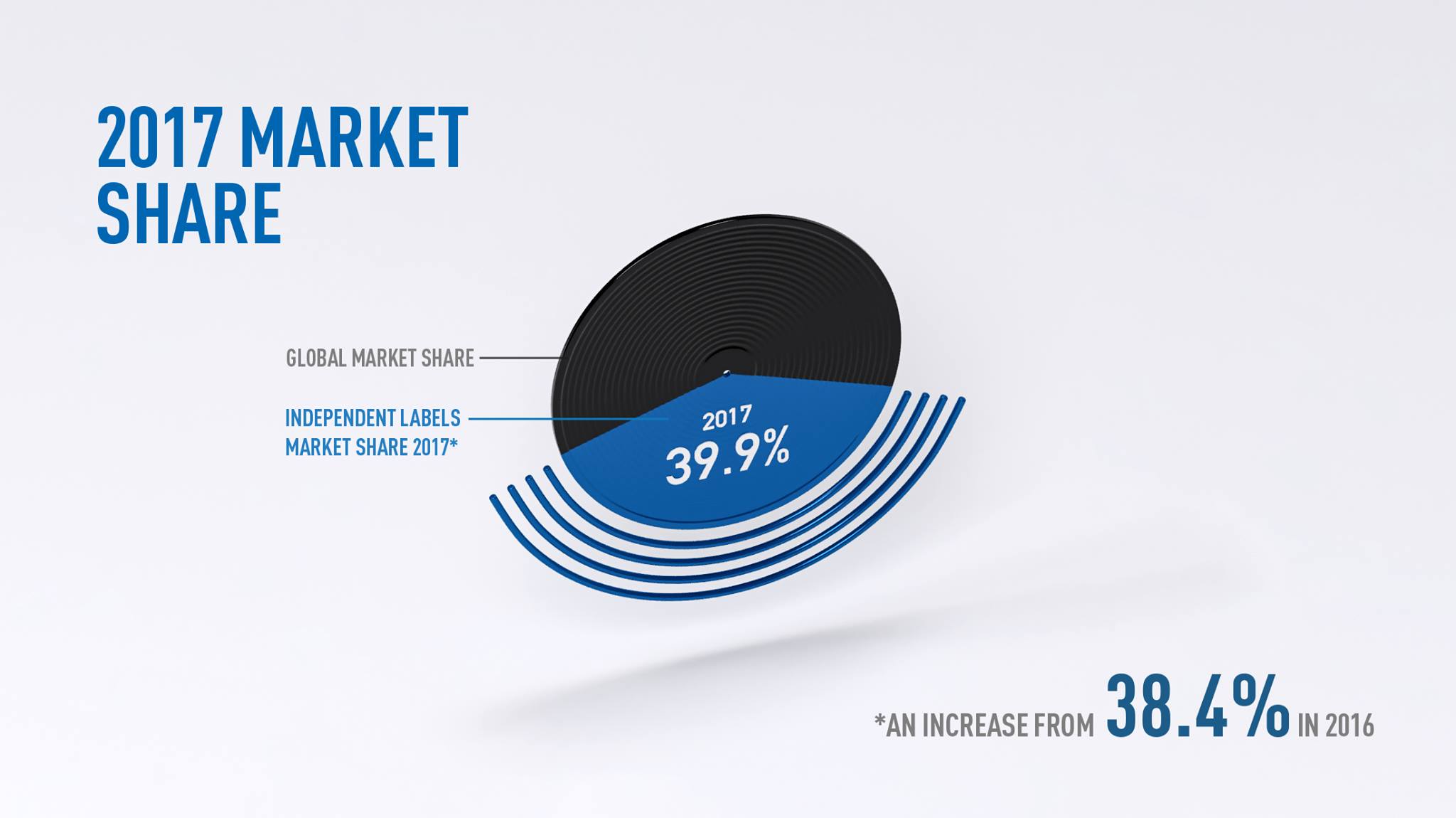 WINTEL2018 is the third report produced for Worldwide Independent Network (WIN),mapping the global market share of the independent sector at copyright, rather than distribution level.

This new report was created and commissioned by WIN to analyse the global economic and cultural impact of the independent music sector. It is created by Mark Mulligan of MIDiA Research, and authored by Music Ally. The results, gathered from 33 countries, represent the most comprehensive assessment of the global independent record label sector ever compiled.

This research shows that independents increased their global market share from 39.6% in 2016 to 39.9% in 2017 with that growth outpacing that of the major labels, whose revenues only grew by 9.7% in the same period.

It is also worth noting that the independent sector outperformed the overall music market, which grew by 10.2% last year.

Causing the global industry to sit up and take note is the rapid rise of the so-called emerging markets with China enjoying a 36% rise in revenue growth, Asia & Australasia seeing a 5.4% spike in revenue and streaming growth of 38%, while Latin America powers ahead with overall growth of 17% and an almost 50% rise in streaming revenues.

It is important to emphasize that this report once again focuses on the criterion of value based on rights ownership rather than distribution when analysing market share.

The claiming of market share by these international corporations, which accounts for 8.6% of the total market and 22.2% of the independents’ market share distorts the true picture of market value.

WINTEL’s analysis by reference to rights ownership therefore provides a much more accurate overview of the marketplace.

It is also important because market share is used by the leading digital music companies such as Apple, Google and Spotify in negotiations with the independent sector and often determines the levels of remuneration paid by these companies to music right holders.

By the end of 2017 music-streaming subscription services had a combined 176 million subscribers globally, up from 64 million in 2016. This growth saw streaming revenues for independent companies grow by 46% in 2017 to $3.1bn, which now accounts for just under 44% of the sector’s overall income, compared to 33% in 2016.

It is increasingly likely that streaming will represent more than 50% of independent music company’s revenues in the very near future as physical sales continue to decline.

One likely reason for this continued growth is the fact that independent labels have adjusted well to accommodate and take advantage of the streaming environment with 47% of respondents stating that it has significantly improved their cash flow, a figure that rises to 73% for labels where streaming is already more than 30% of their revenues.

These figures also hint at an encouraging trend for independent labels – that their investment in artists’ long-term development, and in the album format, is an advantage rather than a risk in the streaming era. With major labels expending considerable marketing resources to break individual tracks, independents are investing for the long term, and are developing sustainable businesses as a result.

Another interesting and positive takeaway from this year’s survey is that 76% of artists signed to independent labels choose to renew their contracts at the end of the term. This is no doubt a reflection of the stability within the labels who are working with these artists. Responses demonstrate that 42% of staff at independent companies have remained there since launch, a fact worth considering in the context of the average independent label being 14.9 years old.

Within this data is an interesting snapshot of the modern independent music company  – the average label now has 13.6 full-time staff, 3.2 part-time staff and 97.6 artists in their catalogue. This latter statistic is relevant to the positive impact that streaming is having on independent businesses with strong catalogues helping grow sustainable revenues.

It is also worth reflecting on what defines ‘independent’ in 2018 – the term is certainly evolving in the modern music industry and besides labels, it also now encompasses artists who are self-releasing their music through third party distributors.

The creative and commercial global explosion of the grime genre, for example, has been underpinned by this model.

WINTEL 2018 reveals that self-releasing artist revenues grew from $94m in 2016 to $101m in 2017. As these artists build teams around them to fulfil various label-like functions, this section of independent music community looks set to grow significantly.

Alison Wenham, CEO of WIN said, “As 2018 draws to a close, we are delighted to publish the third edition of the annual WINTEL report, which highlights the global independent market share increasing to an astounding 39.9% in 2017 a figure that outstrips both the major labels and overall music sector.  There are numerous interesting outcomes from this survey but one thing that really stood out for me is the fact that 76% of artists are choosing to renew their contracts with their labels, which shows  that the indies are forging great bonds with those they represent. It has been another turbulent twelve months for our industry on a lot of levels but we have emerged with powerful new legislation to protect our businesses, fantastic growth in some unexpected territories and increasing support from music fans who have continued to enjoy and engage with the amazing music coming out of the worldwide independent community.”

Martin Mills, Founder of the Beggars Group and Chairman of WIN commented: “With two out of every five ‘purchases’ of music going to the independent sector, now may be a good time to draw breath and celebrate this incredible achievement. In an era in which diversity of all kinds is prized, yet consolidation is the norm, for a cultural sector such as music to achieve such remarkable diversity of both art and business models is truly extraordinary, and due in no small part to our ability to be strong together through our collective organisations.”

Helen Smith, Executive Chair of IMPALA, said: “It’s great to see the WINTEL report in its third edition. The report provides a simple picture of the sector, showing that independents are going from strength to strength, with revenues on the increase overall (+11,3%) and especially in terms of streaming (+46%). The other statistic that stands out is 76% of artists choosing to renew their contracts with independent labels. That speaks volumes about the partnership which exists between independents and their artists. ”

WINTEL will beavailable in print and online at www.winformusic.org  fromDecember 2018 at 8am CET.